Friday night’s show at The Soapbox was a rarity on the Wilmington scene – a show that actually stuck to the promised early start, and, across 30 minute sets from 5 bands, featured only one cover song (a cheeky yet well-executed Taylor Swift cover that we’ll discuss later). This was a major marathon show of original music!

We were pretty excited about this show – we’ve been fans of headliner Rio Bravo for a while, and after listening to the supporting bands online we were sure we were in for an awesome show.

We arrived around 9pm just as Greenville based opening band Myself & I had begun their first song. We were easily and immediately impressed by Myself & I’s live show. Clearly they were tight, focused, and connected with each other and the audience. The singer looked out over the crowd while the keyboardist asked the audience how things sounded. They played a trick on us though. They said that this was their third show ever. We shook our heads thinking there’s no way that was possible. We weren’t surprised to later discover that they had been in a prior band called The Fear of Falling, a band that had achieved national exposure no less. Read our notes if you don’t believe we weren’t fooled.

Myself & I’s sound is reminiscent of The Fray mixed with Yellowcard or Dashboard Confessional. Our intern Katy said she was thinking Cartel and maybe The Ready Set. This is always a matter of opinion and used just to get the general idea. They’re five guys (singer/guitarist, guitarist/backing vocalist, bassist, drummer, and pianist/keyboardist) who play emotional, melodic rock songs with prominent piano; songs about the angst of life and love. Listen to their music online, watch the video, and go see a live show for the real deal.

Lyrics: The song “Losing My Balance” explores life in a small home town with “I’m just looking for an easy way out of things. What’s the point of staying here for the answers when there’s no where to go.” Perhaps the most striking of their songs “Moving On” includes the highly memorable lyrics “I’ll be there when you wake up. And I’ll be there when you grow old… You said you should let me go. Let me go.”

Other notables: We noticed the keyboardist playing backing vocals on the keys. Interesting. Perhaps even more interesting, it appeared that the guitarist was playing a Straight Six Stratocaster. This is unconfirmed, but a single pickup, single knob guitar is a rather interesting choice.

Burden The Hand came out with guitars blazing. Their first handful of songs was an all-out onslaught of hard rock/metal/screamo. They sang and screamed their hearts out.

Burden The Hand is five guys from somewhere in NC, maybe Benson, maybe Smithfield, consisting of two guitarists, bassist, drummer, and lead vocalist/guitarist. They have a lead vocalist, but everyone sings in this band. The bassist shared the most lead, followed by one of the guitarists (who sung lead on one song in addition to regular backing vocals). Speaking of the guitarist, he played some nice tapping work on the song “Burden.”

There was an interlude toward the end of their set by the bassist, who talked about how they consider themselves to be normal guys who love Jesus, and Jesus loves everybody. “We just happen to be Christians in a band… I love Tarantino movies and I love Jesus.” This was followed by a slow, ballad-like, explicitly religious song with the often repeated lyrics “I’m just a man and I feel used,” including an a capella portion. We thought the announcement may have been because they’d gotten flack for being Christian in the past. There was no reaction from the crowd either way, positive or negative. They, like us, were probably just there to hear some awesome rock music, which Burden The Hand did deliver.

After the show, all three of us went on and on about the drummer. Throughout the show this guy was flailing about, spinning sticks, and showing off his obvious talent with ease – all done on a kick ass wood-grain Crush drum kit. Clearly this guy stole the show for us.

Noteables: Every member of this band was wearing earplugs. Hallelujah! Also, the lead vocalist had good control over his voice, hitting the high notes without straining too much. This is important particularly with this type of music so you don’t lose your voice.

From the floor The Capital‘s lead singer reminded us of Rivers Cuomo with his short hair and fitted shirt. He was charismatic, cracking jokes, making fun of himself, giving shout outs to Wilmington as well as to the other bands, especially Myself & I. We also noticed that he was playing a nice brown and tan striped Tom DeLonge signature Epiphone guitar. This makes sense since The Capital’s music is clearly reminiscent of Blink-182.

The Capital plays rock songs, full of power chord fury, with positive messages. One song explored how “beauty is on the inside.” They said they hadn’t played a show in two months, but we couldn’t tell.

Sumerlin brought a big arena-level show to Soapbox. They were sweaty and confident with great stage presence, professional gear, stage lighting, in-ear monitors, and by far the best, most balanced sound we’ve ever heard at Soapbox. The lead vocalist, Dan DiGiovanni, was charismatic, getting the crowd to come closer and dance and sing along.

Wilmington’s own Sumerlin is pop/rock at its finest. (How Soapbox wasn’t packed to the rafters for this band is a total mystery). They’ve got huge power choruses and a strong singer to get the audience to sing along to them. He crouches down and gets intimate with the front row and then jumps up and forward toward the crowd to get them into it. The bassist was equally as energetic, despite being behind a bass guitar and microphone. Speaking of being behind an instrument, the singer is also a good guitar player although he didn’t play at all during this show. This came as a surprise to Kim who had seen DiGiovanni playing guitar around town, including performing and recording with Little Miss Sabotage and the Cornflowers a while back. 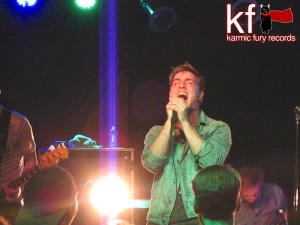 Sumerlin are true entertainers. They put on a huge display the likes of which we haven’t seen at Soapbox since Grace Potter and the Nocturnals graced that very same stage.

Lyrics: Clearly the catchiest song was “Illuminate” with the F.U.N.-like lyrics “Here we are tonight singing. Here we are tonight singing. Woah. We are young-un-ung.” Actually there’s some debate about those lyrics. Live it sounded like they were singing “we are young” but on the CD we picked up we think it’s “we are yours.” Either way, you get the idea behind their lyrical power choruses.

Noteables: Katy appreciated that they introduced each song. Also, although they are an explicitly Christian band, they are clearly enjoyable and incredibly fun to watch regardless of affiliation.

We’ve seen Rio Bravo two or three times before and they are without a doubt one of our favorite local bands, and this was definitely their best show to date. They’ve got a great, unique sound, mainly due to the lead vocalist and the sweet, catchy melodies he produces on his Telecaster.

Rio Bravo opened their set by saying “this is our new sound” and then launching into a cover of Taylor Swift’s “I Knew You Were Trouble.” This was hilarious to both the crowd and the band. The singer was laughing quite a bit, and it was really very funny. They pulled it off very well and if there was anyone there who hadn’t heard Rio Bravo before, they were immediately smitten.

They followed up by the songs we know and love from their album Fences and their latest release Unbelievable Lie. These are epic songs, slow at the start, with an emotional and instrumental build-up, resulting in the listener feeling transported by the music.

Clearly Rio Bravo enjoyed themselves on stage. Their camaraderie with each other is obvious and infectious  They smile a lot and genuinely take pleasure in playing their music. That’s why we were shocked to learn that, after one more show, they’re calling it quits. This is one of our favorite bands and that’s it, no more. It’s a tragedy that the world should be deprived of their music. Maybe that’s overly dramatic, but it’s the truth. To the band it’s no big deal. We stopped the guitarist and he said that it’s not a bad thing, they’re just moving on to other things. Even our intern Katy (who had never heard of Rio Bravo before) was truly heartbroken.

Editor’s Note: After we posted the review, we received a response from Rio Bravo clarifying their decision to split up. “…[C]alling it quits is a big deal to us. We had dreams of world tours and doing this for the rest of our lives but due to multiple things we weren’t able to make it happen. We’ve all gotten to the point where we had to keep jobs to support ourselves and now our jobs have taken #1 priority. We are all best friends and will always play music together though. -Christian Black, Drummer, Rio Bravo